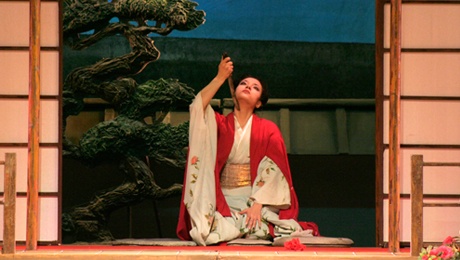 I love it when Ellen Kent comes to Scotland, & she loves it too, a marriage of romantic convenience, rather like the basic premise of Puccini’s long beloved Madama Butterfly. ‘Why Butterfly?’ I ask’d the vivaciously ebullient Kent. ‘Because it is the most popular opera in the world – a great story and music to die for,’ her reply. After the smash-hit success of Tosca & La Boheme – both Kent favorites – Puccini started musing upon a new opera to stand upon his burgeoning reputation. Verdi had died in 1901, a moment which crowned the ‘regent’ as chief paramour of Italian opera. Butterfly was the exotic result, balancing its floating, febrile wings on the Bashoesque libretto by Illica and Giacosa. ‘At the turn of the last century,’ Duncan Hadfield told the Mumble, ‘the lure of the exotic attracted a number of Western artists in all sorts of ways – the novels of Joseph Conrad, the paintings of Gauguin, Debussy’s pianistic attempt to replicate the timbres of the gamelan. As was his  way, Puccini too spent his Butterfly period almost turning himself Japaneses, researching the country’s native folk melodies, attempting to capture the pattern of Japanese intonation, & exploring the sonorities offered by a a host of the percussion family’s ever-expanding numbers.’

The story is simple, a 15 year-old Japanese child-bride is abandoned by her diplomatic American husband not long after the wedding; whose return three years later with an American wife kicks of the inevitably tragic & magically operatic conclusion. As usual, Kent packs her production with international soloists, a highly-praised chorus and a full tight orchestra, with star billing going to the uniquely entrancing vocal abilities of celebrated soprano Maria HeeJung Kim, from the Korean National Opera House of Seoul. Her voice is sweet & siren-like, but great tribute must be paid to Zara Vardanean, who plays Butterfly’s maid Suzuki – their duets are phenomenal, allowing HeeJung Kim’s vocals to flow like melting honey.

The set is luscious, an authentic Japanese garden, whose ear-twinkling fountain-gush inspired one of my co-attendees to visit the toilet on more than one occasion.  The First Act is a perfect paean to love, when the fabulously named Pinkerton (the surname is based on famous American detectives), bursts lungs with his Dovunque al mondo, in which he tells the American consul, Sharpless – played by the company’s best male singer, Chisnau-train’d Iurie Gisca – that the Yankee wanderer is not satisfied until he captures the flowers of every shore and the love of every beautiful woman. “I am marrying in the Japanese style: for 999 years, but with the right to cancel the marriage each month.’ A Spaniard (Giorgio Meladze) playing an American, singing Italian in Japan, via Edinburgh; one cannot get more Human than in these moments. First performed at La Scala in 1904, the Japan Puccini portrays is the one perched half-way between the opening up of the islands to the world in the 1860s, & the horrors of Hiroshima & Nagasaki. Indeed, Butterfly is set in the very latter city.

The stage is set for tragedy, of course. Pinkerton admits as much in the first act when he sings of Butterfly being  ‘small & delicate like a crystal,’ & an off-the-cuff mention of crushing, ‘her fragile wings.’  Meladze’s voice is clear, smooth & satisfying, like sitting in a bubble-bath drinking gin straight from the freezer – his stint singing with Jose Carreras at the Austrian Opera Festival in 2014 has clearly rubbed off. We know that tragedy is coming, & coming soon, but the sentiment of HeeJung Kim’s poignant ‘Un bel do vedremo’ was simmering still with the chirpy joys of the first act. Spurning the advances of local bigwig Yamadara, she stays stoically faithful to Pinkerton, becoming possessed with a faintness of mind & a total indifference to reality. Things then proceed rapidly dramatical, as one by one the audience’s hands became fixed over our gaping mouths, as our souls drained with the emotion of a superbly drawn out denoument. 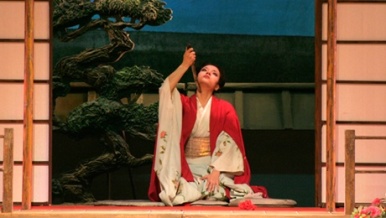 You can still catch her Madama Butterfly this Spring as one of the three operas that form part of Kent’s annual touring tryptych. This year she is offering up La Traviata & Rigoletto – both by Verdi – & of course Puccini’s oriental masterpiece. With Madama Butterfly, Puccini’s mercurial genius attains quintessential harmony, & watching this opera is rather akin to sitting on a marble seat admiring & studying a fine Gainsborough portrait to the sounds of summer birds. Kent has done brilliantly with her materielle, I especially like the entrance of Vadym Chernihovskyi’s Bonze to a cymbal smash, while her gaggle of geishas spinning paper parasols  in authentic costume has seer’d a succulent indelible vision into my heart, as has the beautiful singing of HeeJung Kim.